We use a program called OK for assignment feedback. You should have OK in the starter files downloaded for this assignment. To use OK to test a specified function, run the following command:

By default, only tests that did not pass will show up. You can use the -v option to show all tests, including tests you have passed:

Others say that this is like driving a car by only looking at the rear-view mirror.

You will build a trading strategy based on technical analysis of stock prices and explore which group is right.

The one-step MA is simply the current price: MA1(t)=ptMA1(t)=pt, and the two-step MA is the average of the current price and the previous day’s price. Tf the moving average span nn is short, the MA reacts quickly to any shocks to the stock price. If the span nn is long, it reacts slowly. If the moving average spans the stock’s entire period of existence, it is just the all-time average price.

The figure below shows an example of the Nasdaq index’s development, along with two different moving averages. Notice how the two-step moving average follows the index more closely than the five-step one, which reacts to price changes more slowly and less strongly. 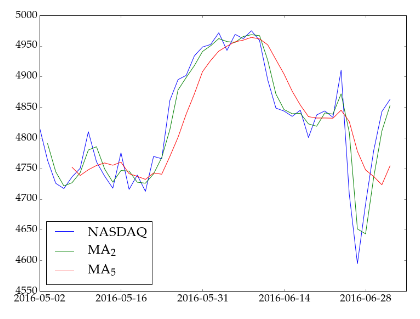 A theory put forward by proponents for technical analysis has it that moving averages give an indication of the “momentum” of a price. In particular, by comparing two moving averages of different lengths, one should be able to infer that the momentum of a the stock is changing, giving a signal when to buy or sell the stock.

Inspecting the figure, it looks like those dates may indeed have been good times to trade. But in general, can you make money based on such strategies? Your task is to evaluate this claim by writing a Python script that calculates two moving averages of a (historical) stock/index price, finds all the crossover points, and finally performs trades based on those points.

Some advocates of technical analysis claim, for example, that by looking at the 20-day and 50-day moving averages of a stock price, one can identify longer trends and benefit from them. Let’s create a trading strategy to this idea.

A standard benchmark strategy is buy and hold: you buy the stock in the beginning of the horizon and hold it until the end. Complete the function buy_and_hold in hw02.py. The function takes as input a list of prices, a starting index, and a starting cash position. It should return the value of the final position if the entire cash position is used to purchase stock at the starting index.

Please do not use Python libraries such as numpy or pandas for calculating moving averages (but you may want to use the sum function on a list).

Complete the function compare_mas in hw02.py. The function takes as input two lists ma1 and ma2 (of moving averages of prices) and returns a list of indicator numbers by comparing the elements pairwise. Each indicator in the returned list takes either the value 1 if the value in ma1 is strictly greater or 0 if not. A crossover occurs when the indicator changes value. The moving averages may contain None-values in the beginning. If either value is None, the indicator is None.

Complete the function ma_strategy in hw02.py. The function takes as input an initial cash position (a float), a list of prices, and a list of comparison indicators as described above. It uses these data to make trades at crossover points of the moving averages as follows.